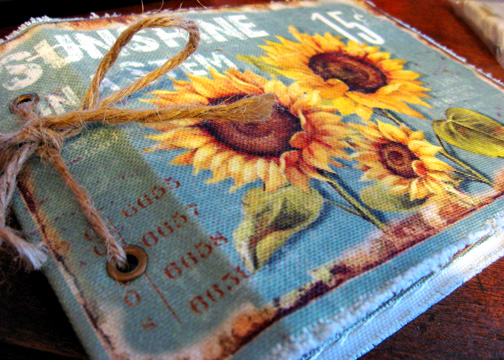 Readying? That doesn’t look like a word to me, but whatever.

I picked this little journal up at a local store on clearance last year. It started with an idea from SouleMama’s blog post about having a farm journal in her home to record everything from seed orders to garden plans and such. I thought it was a fantastic idea and a perfect excuse to find a journal (I think I paid $3 for this one?) to write in. As much as I love the internet and blogging, I really enjoy writing in journals.

I placed my big seed order for the garden this morning. Which wasn’t a big seed order after all – just $20 or so. We have a small area, though – not the big farm like I want to own eventually. I’m trying some new veggies this year – our garden has normally been a ‘salsa’ and ‘pickle’ garden, raising tomatoes, peppers, cucumbers, and onions. This year I’m trying some multi-color corn (for use as decorations and for tortillas, since the description says it can be ground up and used as so) as well as pole green beans and some black beans for soups and stews.

There are trellises to build, seeds to start indoors, and so much more. This year we’re going the vertical route, trying to trellis up as much as we can to maximize space. I love cucumbers and pickling, but one cucumber plant takes up a giant part of the ground space the way we normally do it. I hate that our growing season isn’t as long as some of the blogs I read (I’m talking about you, Californians!). We can’t do anything during these winter months but dream of digging back into the soil after the temperatures rise and the ground thaws. So until then I’m keeping myself busy with everything I can do. 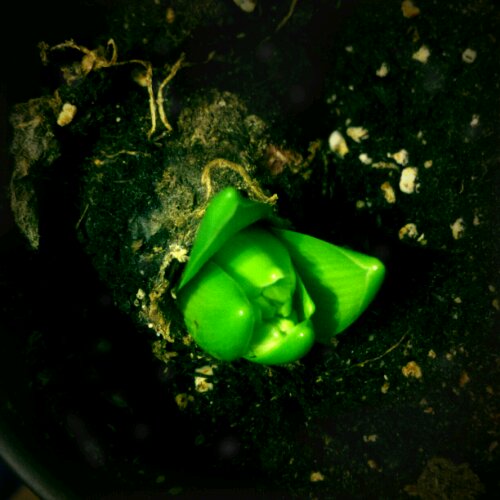 Sometimes being lazy with the gardening has it’s perks.

Last spring I bought some bulbs from the local home improvement retailer. I realize that a. I should have purchased bulbs in the fall and b. I could have gotten a whole bag for what I paid for the potted ones… But it was really a spur-of-the-moment choice. 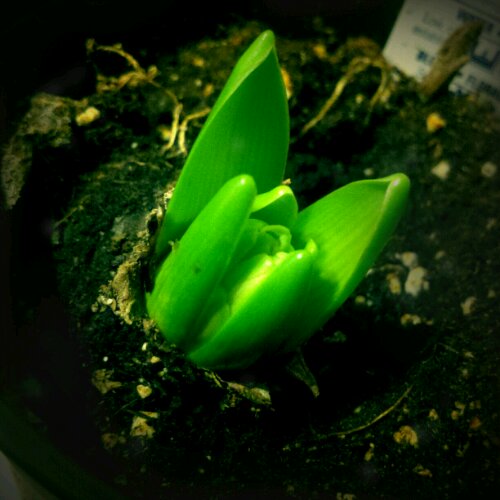 Failing to plant these babies into the ground in the fall, they sat indoors by a window looking rather pathetic (after all, it was just a plastic container of dirt to anyone who didn’t know better). Until now – now they show signs of life. Signs of growth. Signs of the thing I need most this time of year: reassurance that winter, my least favorite season – made only enjoyable by warm hand knits, will be over before I know it. 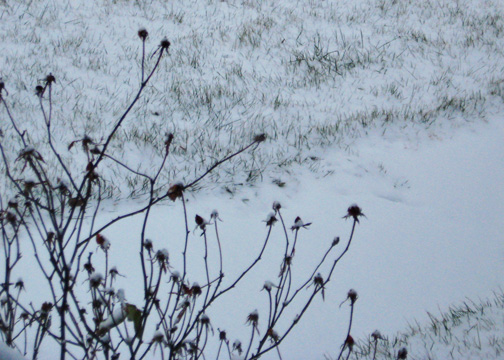 The first real snow. It doesn’t look like much, but I promise you there’s probably about an inch or so sitting there. The grass hasn’t been mowed since sometime in October. That rose bush needs trimmed bad. The garden needed tilled. But all of that is meaningless now. Winter is upon us, and I’ve once again proven that I can’t manage even the small tasks around here. What the hell am I going to do if I get the farm I so desperately want?!