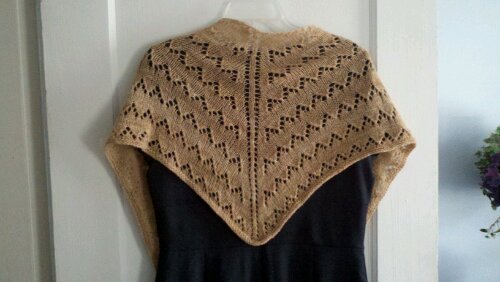 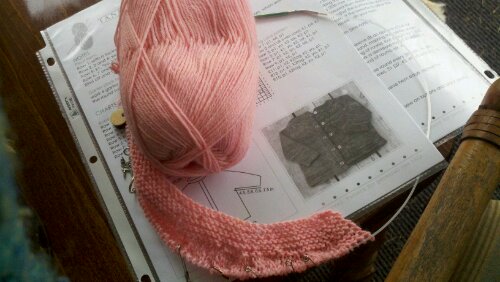 A little Sunnyside cardi in the works. I’m chilling out on the porch listening to the rain. And, quite frankly, freezing my fingers off but I’m sick of being couped up indoors.

Knitting is a good thing to do to keep my mind off the sugar cravings/withdrawal.

(Yarn is Kertzer On Your Toes in pink.  I also have one to knit in coral after this one is done!)

We had a jam packed weekend, filled with some bits of fun but also a lot of work. Sunday we tackled putting the office back together after the “why didn’t I remember how much I hated painting before I decided to paint this room” project. Which involved going through the office closet and all of our computer stuff – the books, cables, CDs, random bits of computer parts, paperwork, etc. There were a lot of things that both the Mr and I have held onto for more years than we should have.

The whole day gradually built up to a meltdown, on my part, rivaling that of one you might see on an episode of A&E’s show Hoarders. Going through boxes of things that have been with me for 10+ years was hard. In that moment it didn’t matter that I had forgotten about the items. Throwing stuff out was like throwing away pieces of my life. The games I used to play when I was a kid, the books I used to learn how to write CGI/Perl, the music CD’s I used to listen to…  I broke down. I cried. I felt stupid. I know it’s just stuff and it’s not the item itself that matters, it’s the memory I have of it. I’m not losing those memories. But irrational emotions won out over logic.

So we quit. We’re not done, yet – the office is still in a state of disarray. There are still things to go through, get rid of, etc. But I’m saving it for another day. One where I’m more prepared and at peace with letting things go. And I’m doing it in smaller pieces, because clearly I’m more emotional about my stuff than I originally thought. 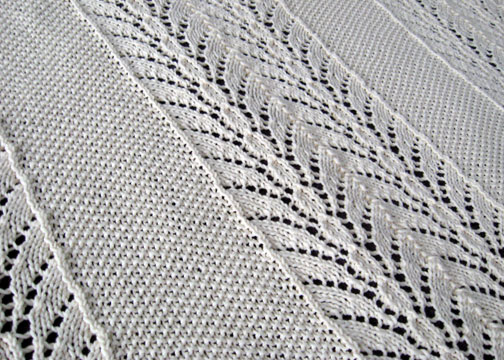 Tomorrow this pretty little thing goes to a new home. After yesterday’s meltdown I planted myself firmly on the sofa and knit and knit and knit some more until this lovely little blanket was finished. I’m slightly sad that I spent all those hours on something just to hand it over to someone else (selfish knitter is selfish), but I’m glad that it’s finally done and blocking and that I can move on to other things.  I’m eyeing the Afternoon Tea shawl to knit in some handspun, but I feel as though I might need something quick and easy – perhaps a hat, or maybe finish the pair of no-purl Monkeys I’ve been working on during long car rides. 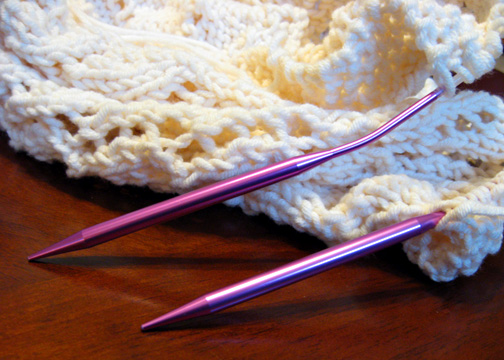 I’m considering this project a learning experience. It’s not a particularly hard knit, though despite being on the 4th ball of yarn I still have yet to memorize the pattern and it does seem to take forever to get through a pattern repeat. It’s a commissioned piece – a baby blanket.

And thus the learning experience: I hate knitting for other people. On a deadline. On large/never-ending projects.  I mean, I’m not the Yarn Harlot and her epic blankets of awesomeness. I can’t crank these things out with magical speed. I barely have the patience to knit anything for myself.

These last two balls of yarn can’t knit up fast enough. I sense a full weekend of couch dwelling, movies, and knitting until my fingers bleed coming up. 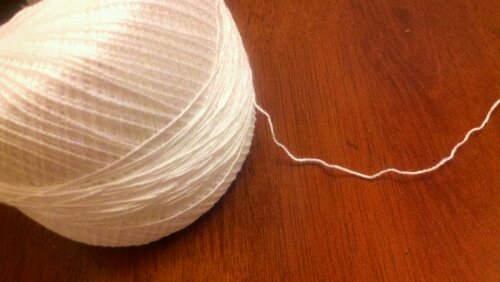 Maybe just one this time around.