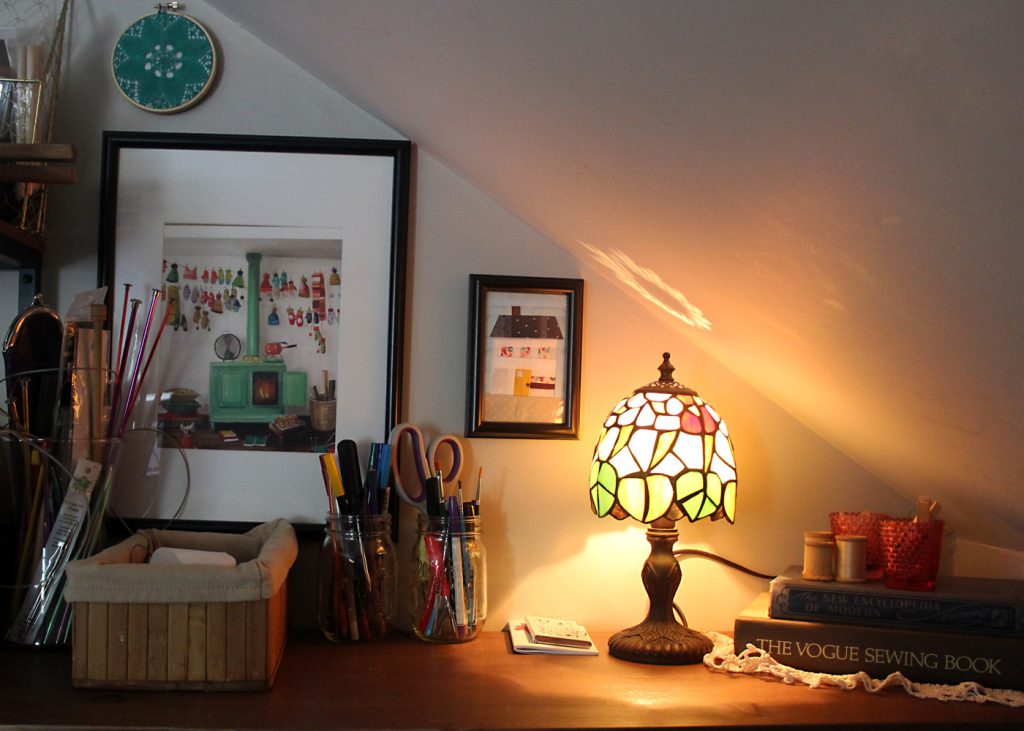 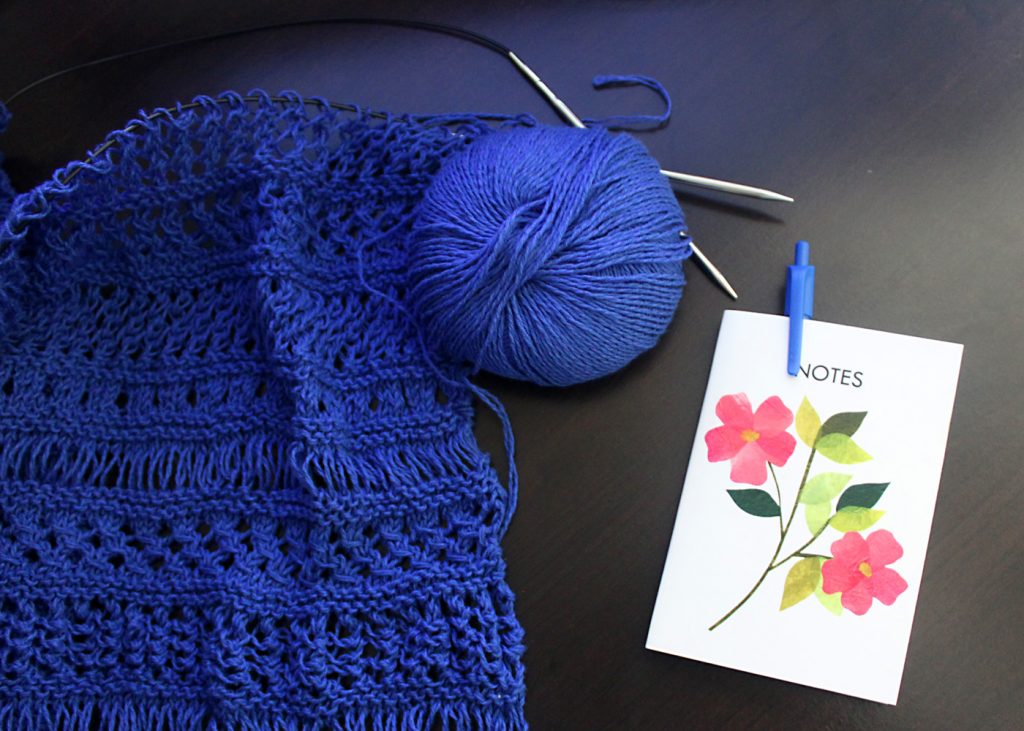 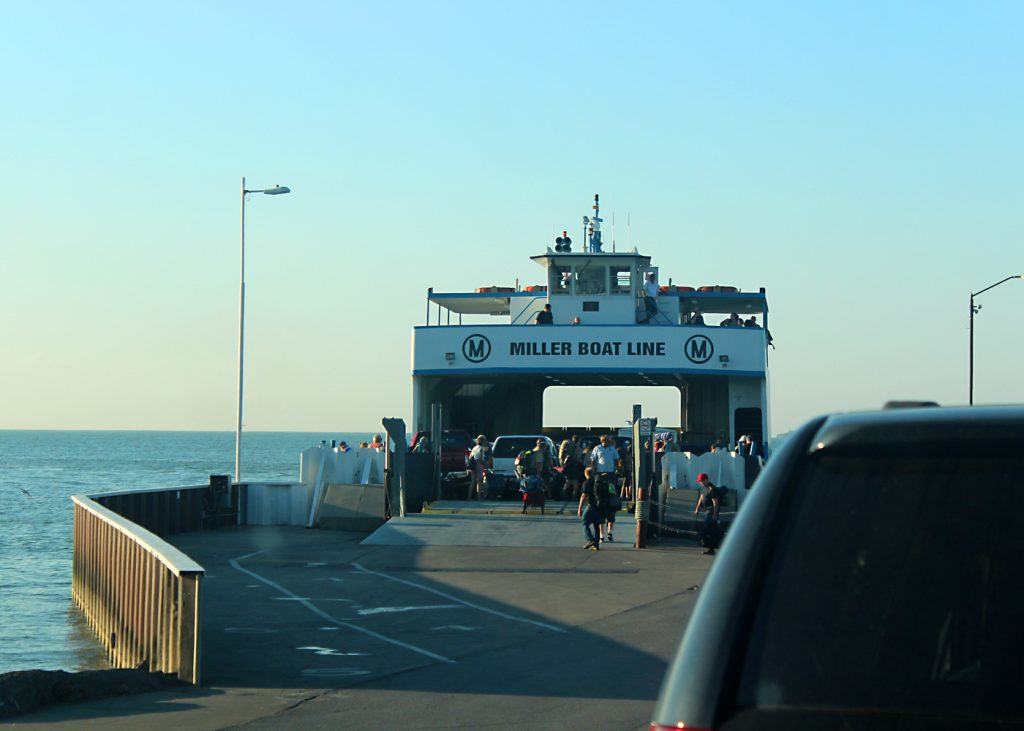 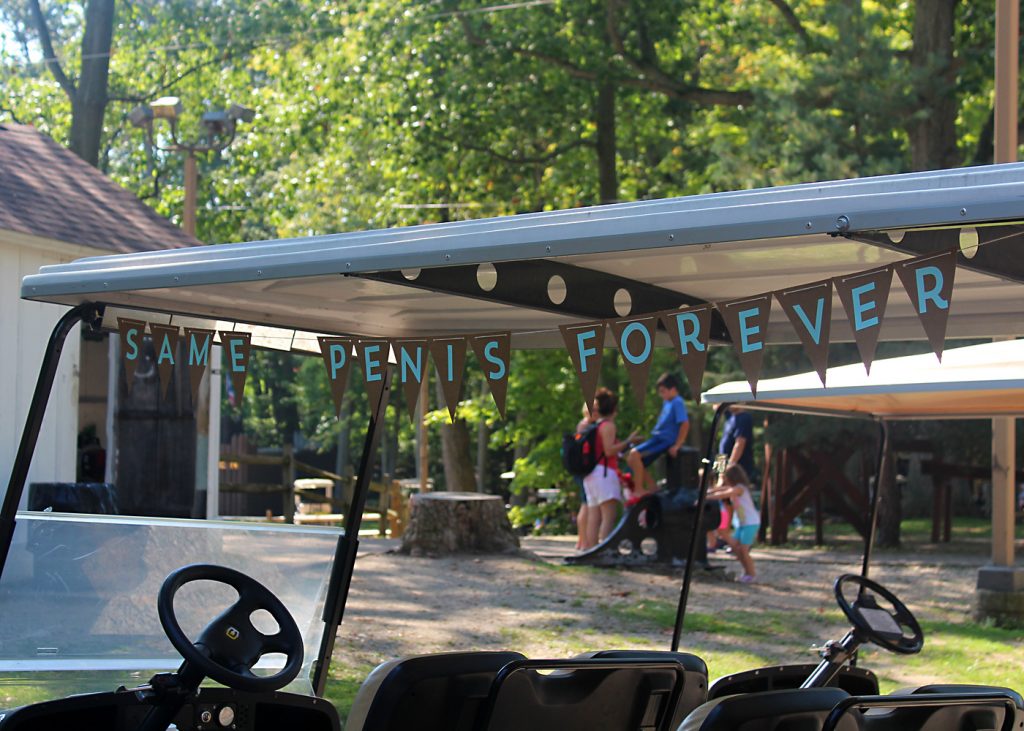 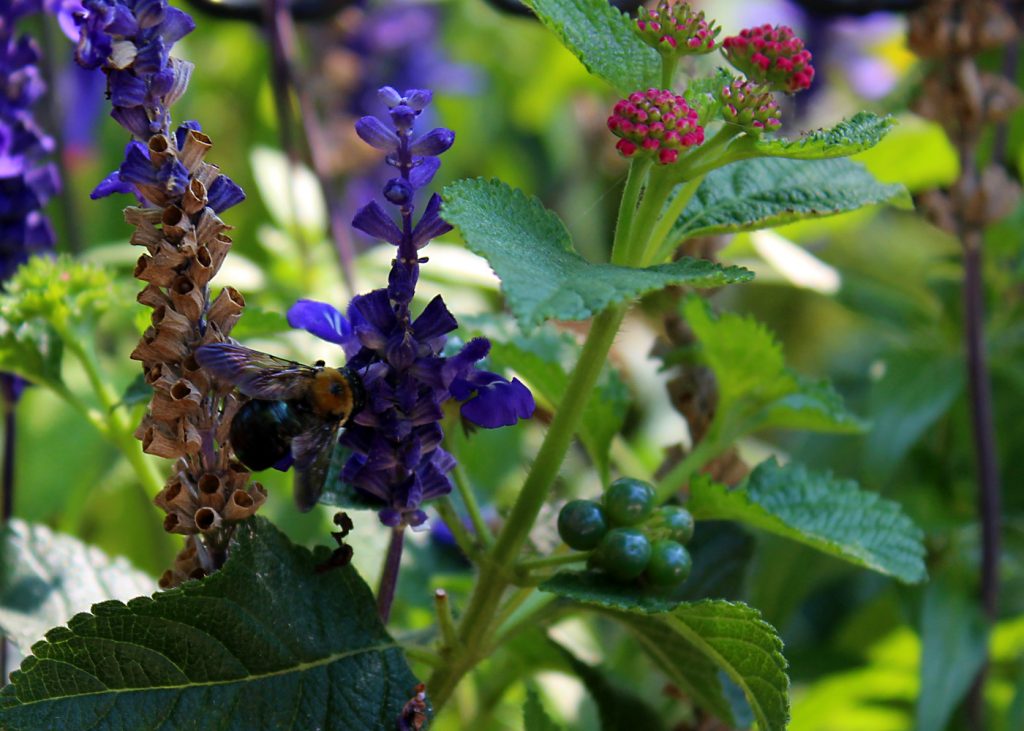 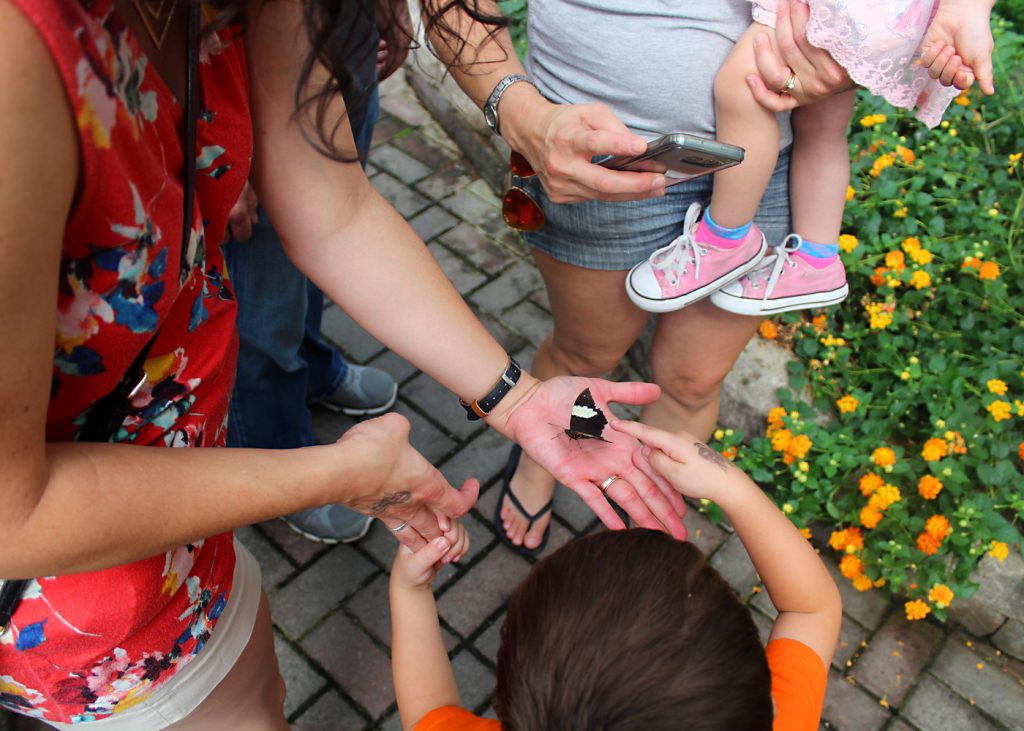 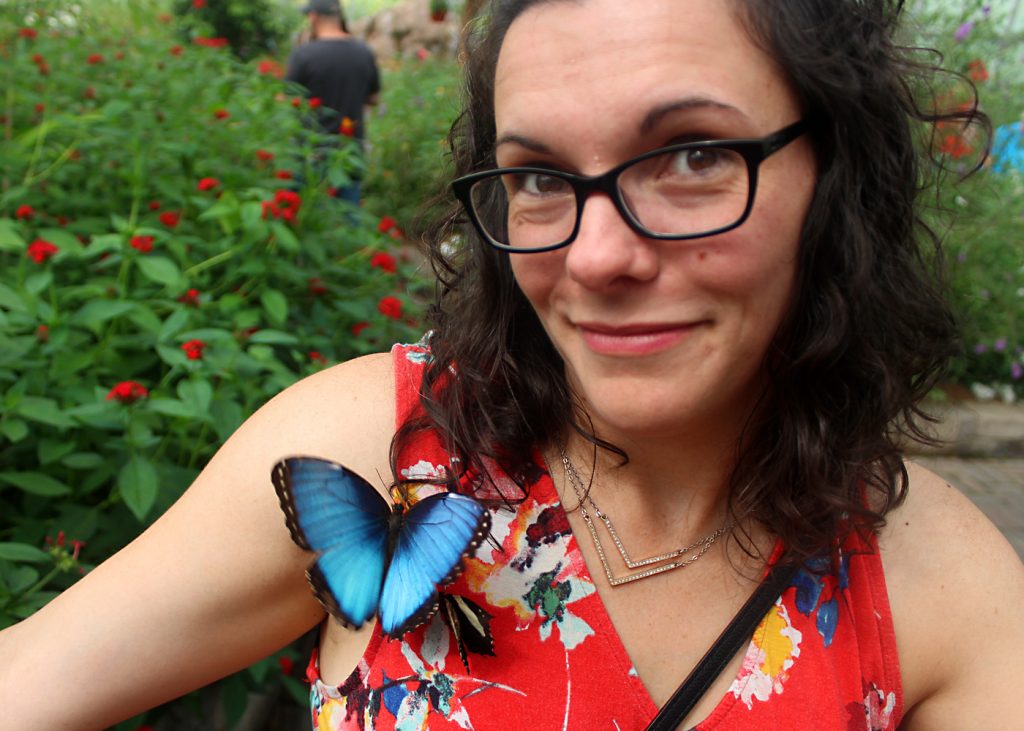 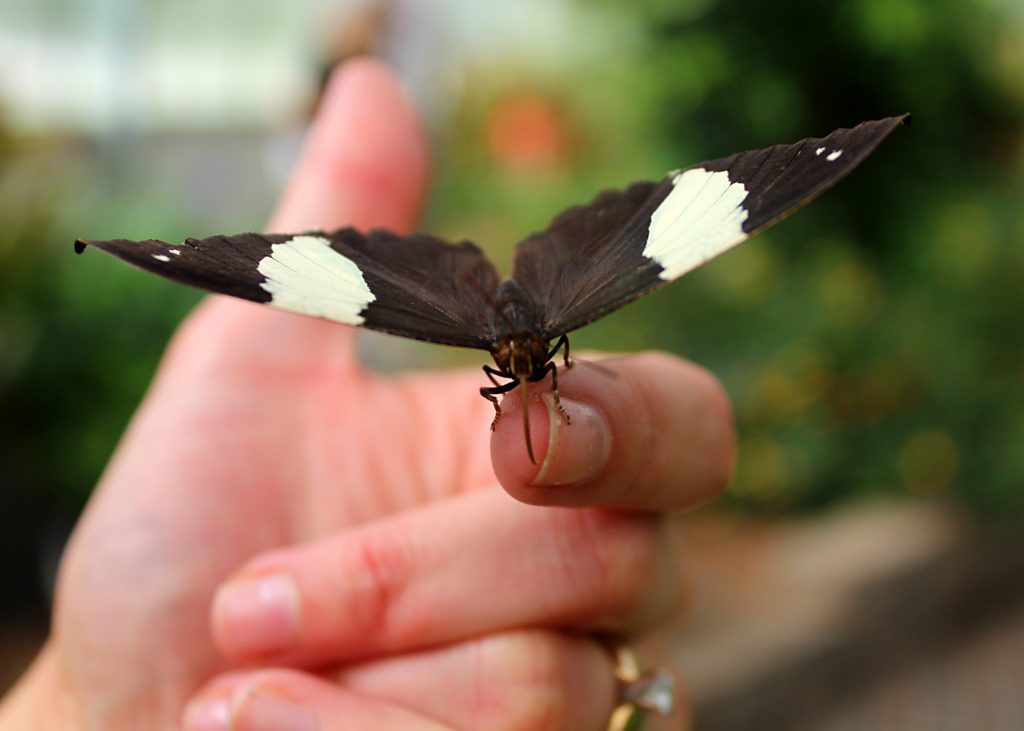 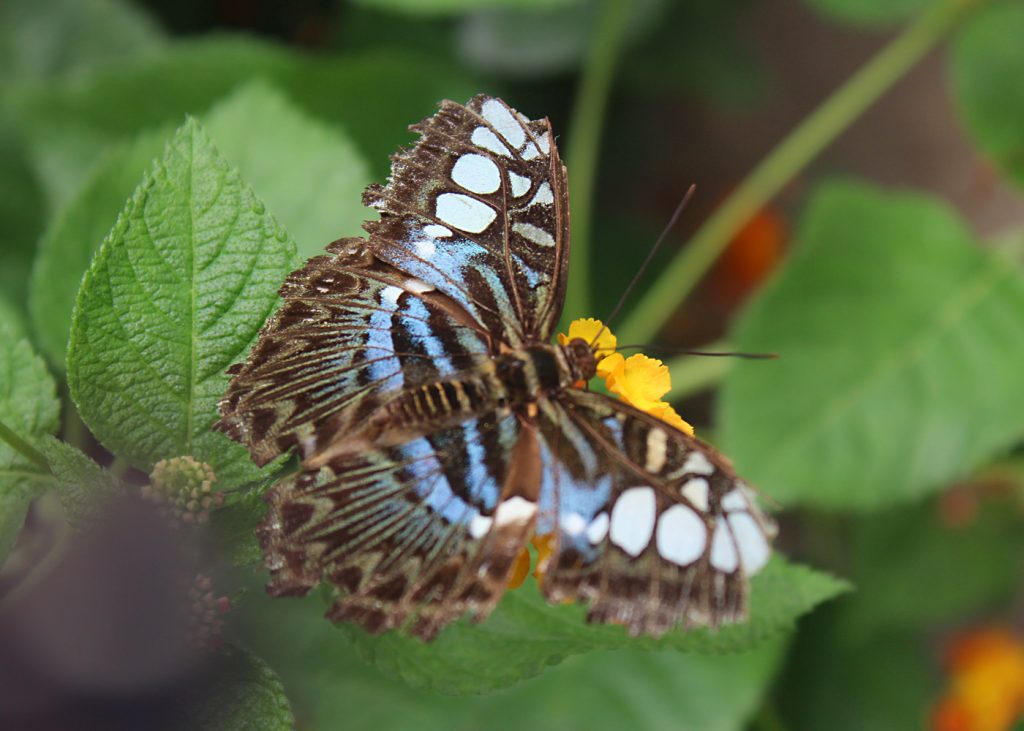 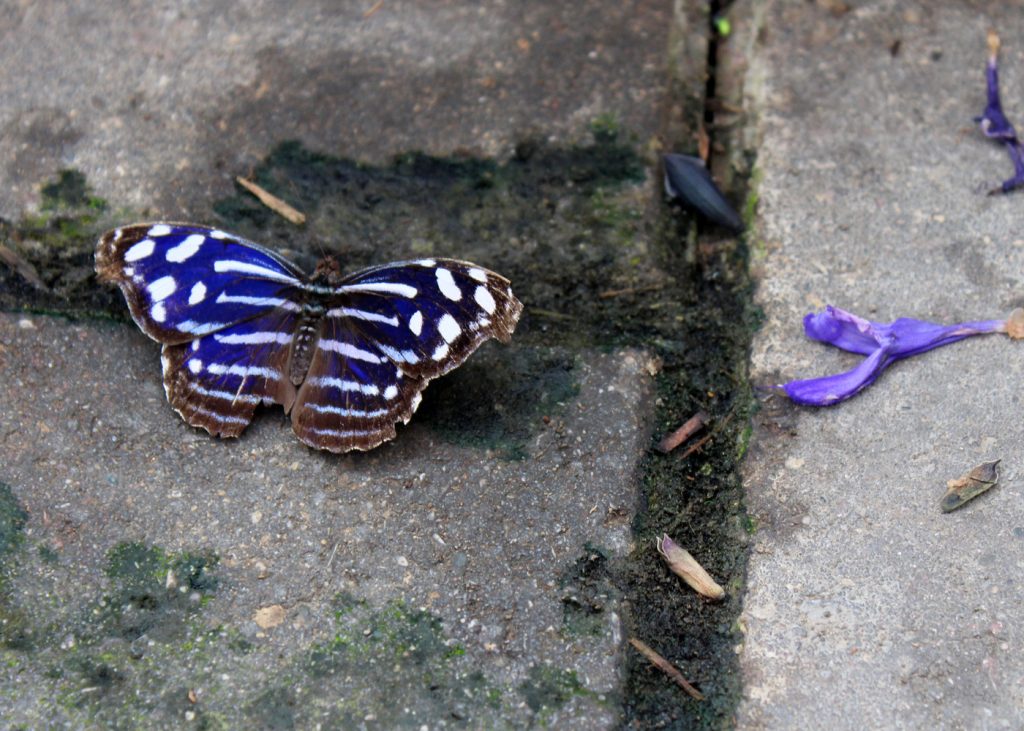 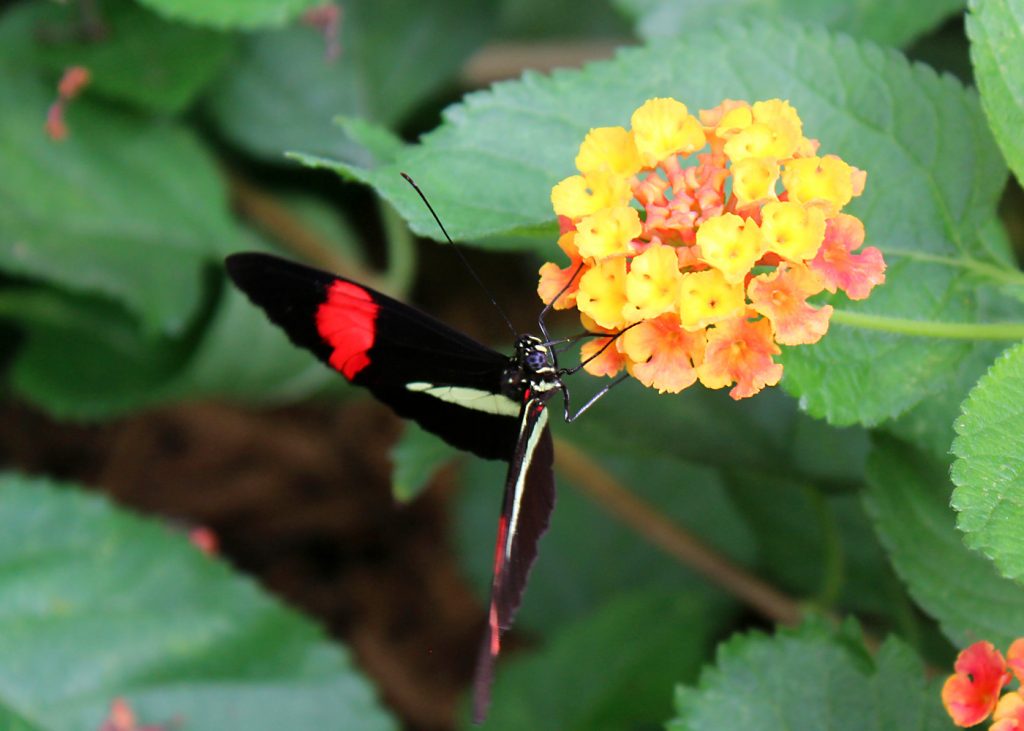 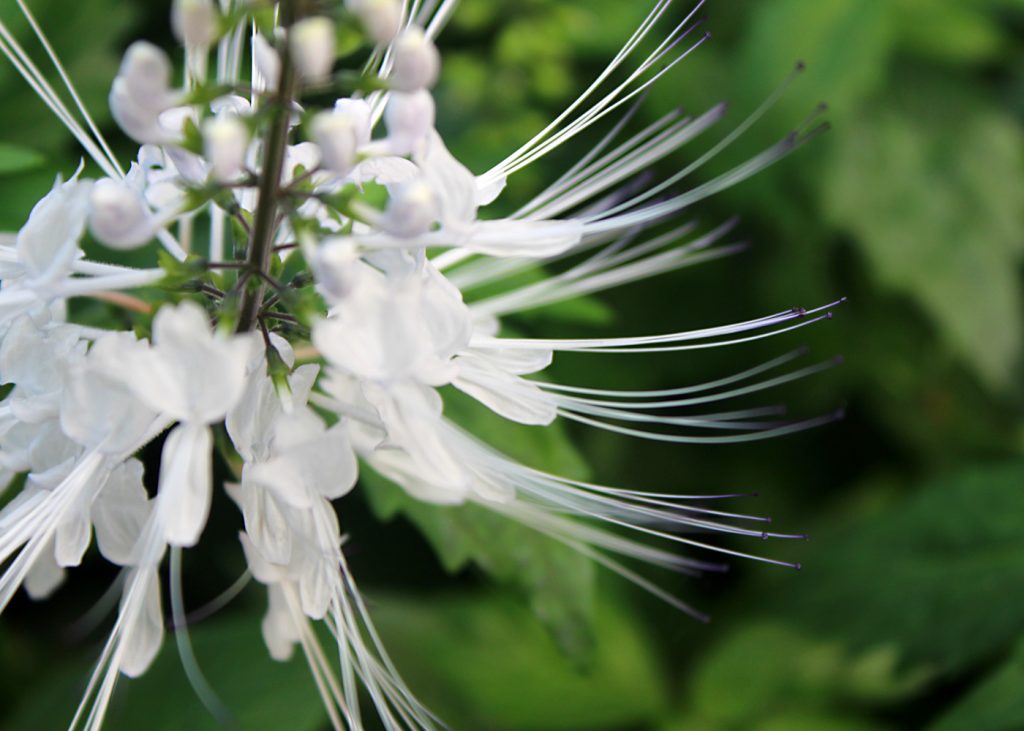 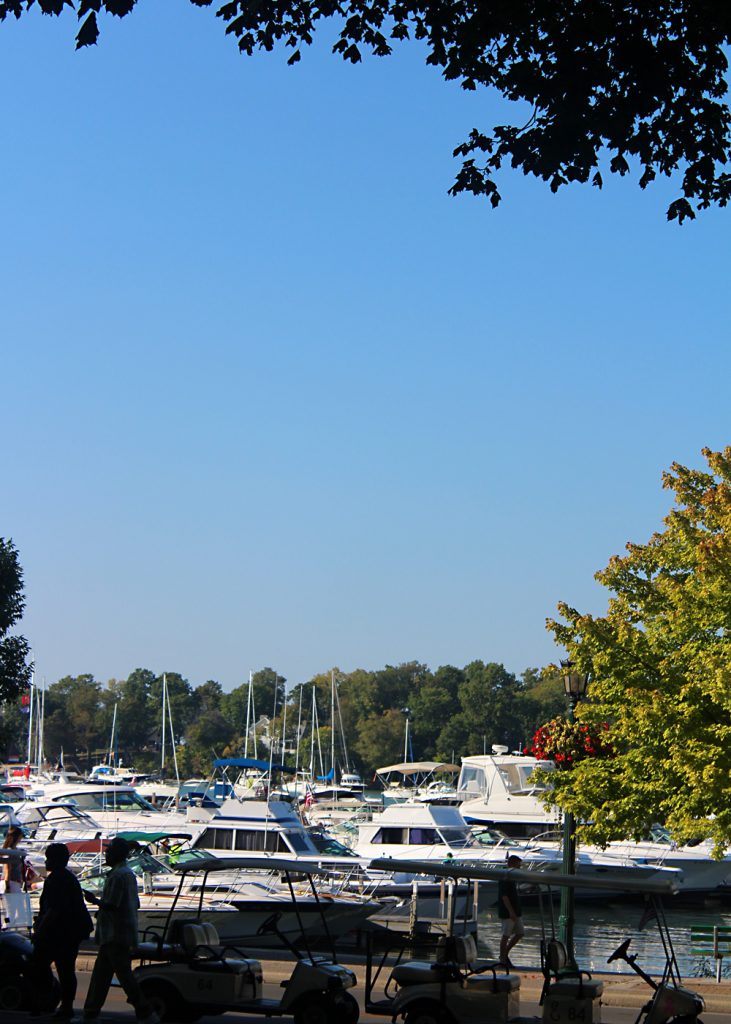 We had an impromptu weekend away to Put In Bay with some friends and their daughter, which turned into this amazing end-of-season trip. Normally, Put In Bay is pretty packed during the regular season. But, given it was after Labor Day, it turned into the perfect escape. At home, temps were over 80 degrees – at the lake, 70s. Warm and breezy and sunny and just plain beautiful. The weekend was spent at the Butterfly House, where most of the photos were taken, and just kind of lazing about. We’d cook some meals, eat out for others. Naps were taken. Board games were played (Settlers of Catan, which is now my new favorite game). A bit of knitting done, though not much. A perfect end-of-summer weekend before fall sets in. ♥ 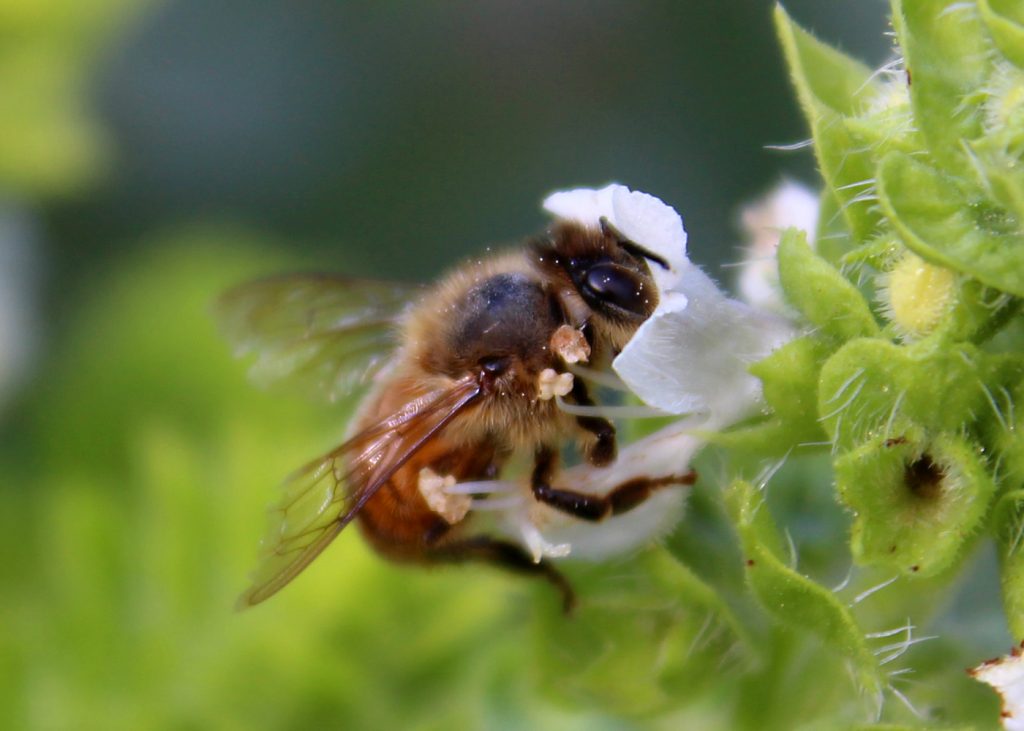 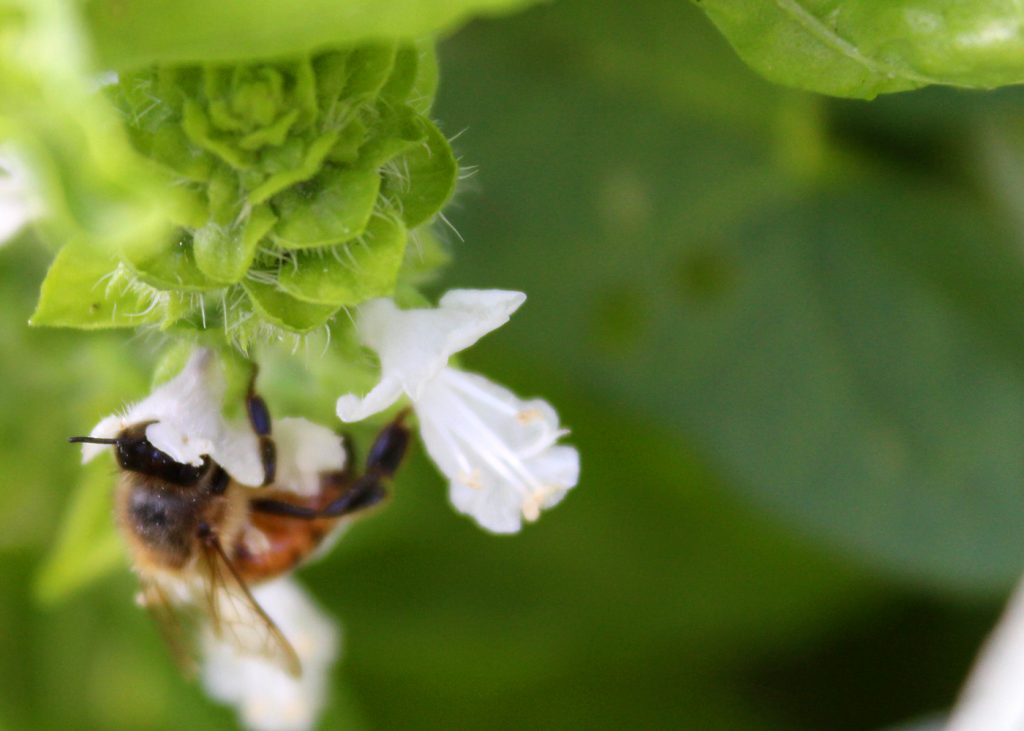 Found this little cutie taking advantage of my laziness and getting the pollen off my flowering basil. I have a kid-free evening, and decided to throw together a quick garden harvest meal (roasted eggplant, tomatoes, and fresh basil drizzled with some garlic olive oil, served over some pasta… it smells amazing so I’m hoping it tastes just as amazing), so I’m thrilled that coincidence of it all led to getting to watch this little one work for a bit and take a few (blurry) photos. ♥

I can’t decide if I want to curl up with a book and read, or watch a show and knit with this alone time. There are too many possibilities to choose from!

The local kids are nearly all back in school, and this afternoon, after pre-schoool open house, there was the distinct feel of autumn. Just a slight hint of it, mind you, but there it was – hitting me all at once and, yet, as slight as a whisper. Autumn – the time of sweaters and apple picking (and, subsequently, apple everything in the canner and oven), warm woollens being brought out for wear, the heavy blankets/quilts making their return…

We’re still much too far away for proper fall. Leaves won’t even begin changing until late September/early October, and by the time my annual knitting weekend comes in November everything will be drying up as winter creeps in. That brief moment, though, made me realize how much I’ve missed the woods. We haven’t gone camping since before we had the kid (over 3 years now). The woods, and nature, are like a spiritual need to me – just sitting in a quiet place and listening to it breathe fills me up in the way I imagine religion feels to those who believe in a god. I can’t really explain it better than that, if it even makes sense. I used to get my fill when we’d go camping. I could just sit and sit and sit and listen and knit and just… be.

Now, my fixes come in smaller bouts – mostly at my yearly knitting weekend. But I feel a bit self-conscious stepping away from the group to go sit alone and close my eyes and listen. I love my friends, but I’m pretty sure they might think I’ve gone off the deep end if I tried to explain it.

So, today, with Autumn ever-so-slowly creeping closer, I’m missing the woods. And living vicariously through everyone else I see who is brave enough to camp with little ones. 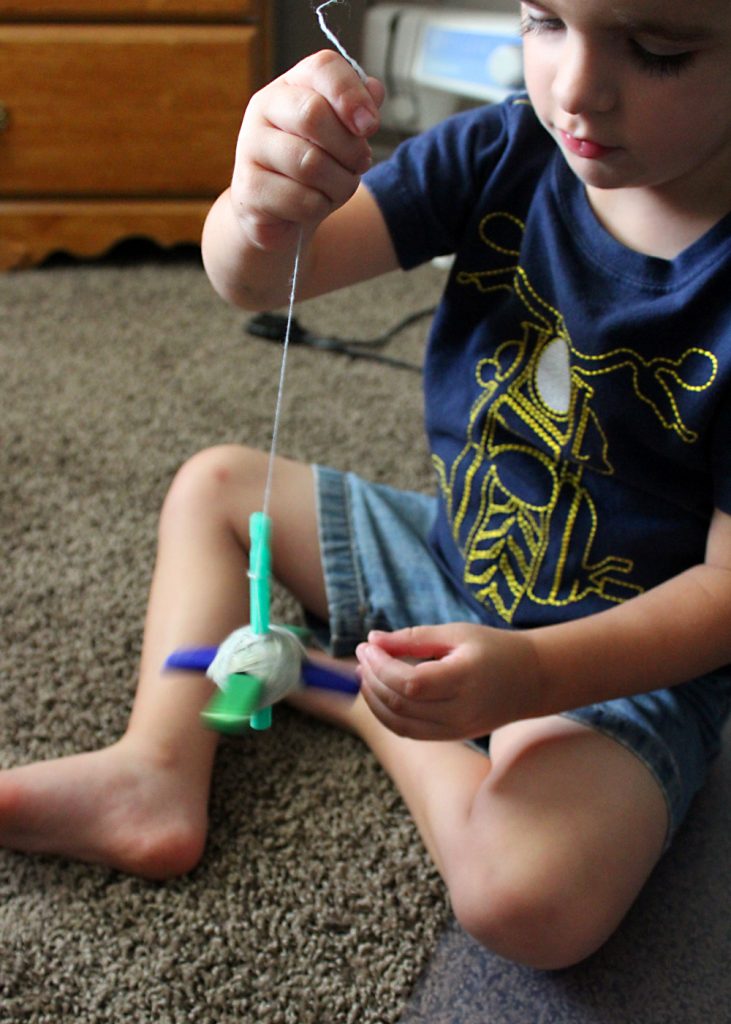