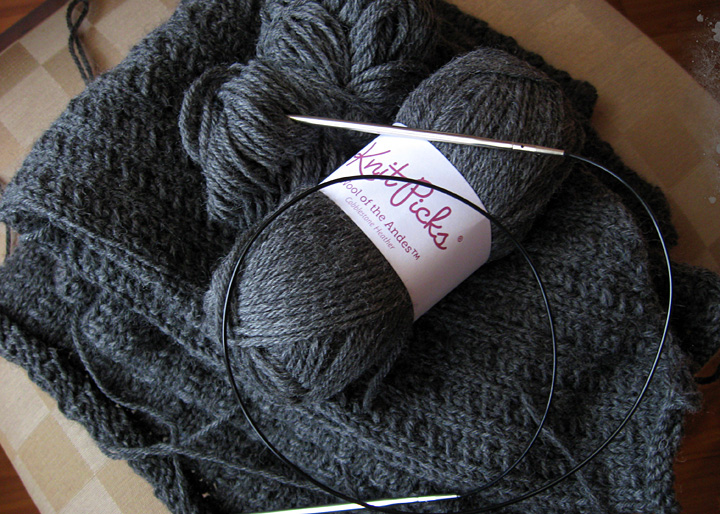 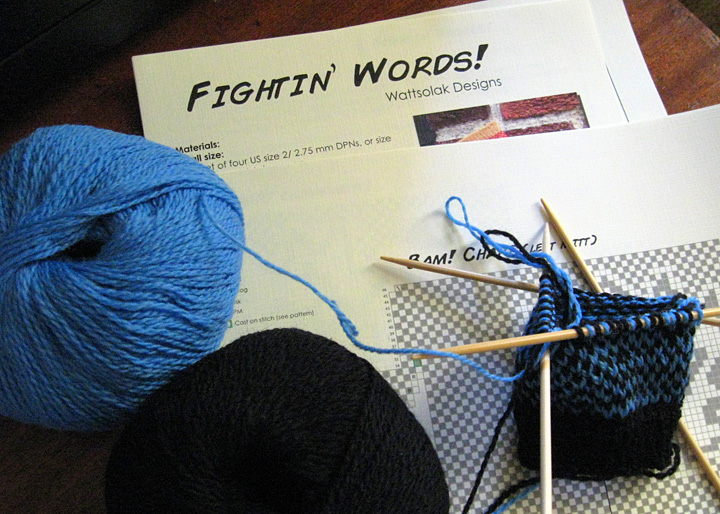 Total balls of yarn ordered from the Knit Picks sale: 55. Total balls that aren’t actually for me to knit (they’re either for a gift or for teaching some kids to arm knit next week): 31. Years it’ll take before I actually even knit up the 24 I did order: 5. Chances of me losing interest in the projects I ordered yarn for before I get to them: high.

I am, to be fair, quite determined that tonight I’ll finish the binding on the quilt tonight. I have cleaned my craft room in anticipation of it. I’ve decided to forgo the hand stitching and just machine it. Sure, it looks prettier hand stitched… but that requires time to sit and sew it all down. And that time needs to be used for the knitting projects – the husband’s cardigan, mainly.

Thanksgiving is this week. The time crunch is officially here to get projects done and it’ll probably involve some re-evaluating of my list to see what can wait until after the holidays (probably those flannel shirts I want to make for the Little Mr – I have enough fabric to make the next size or two up so it might end up becoming a late winter project instead). 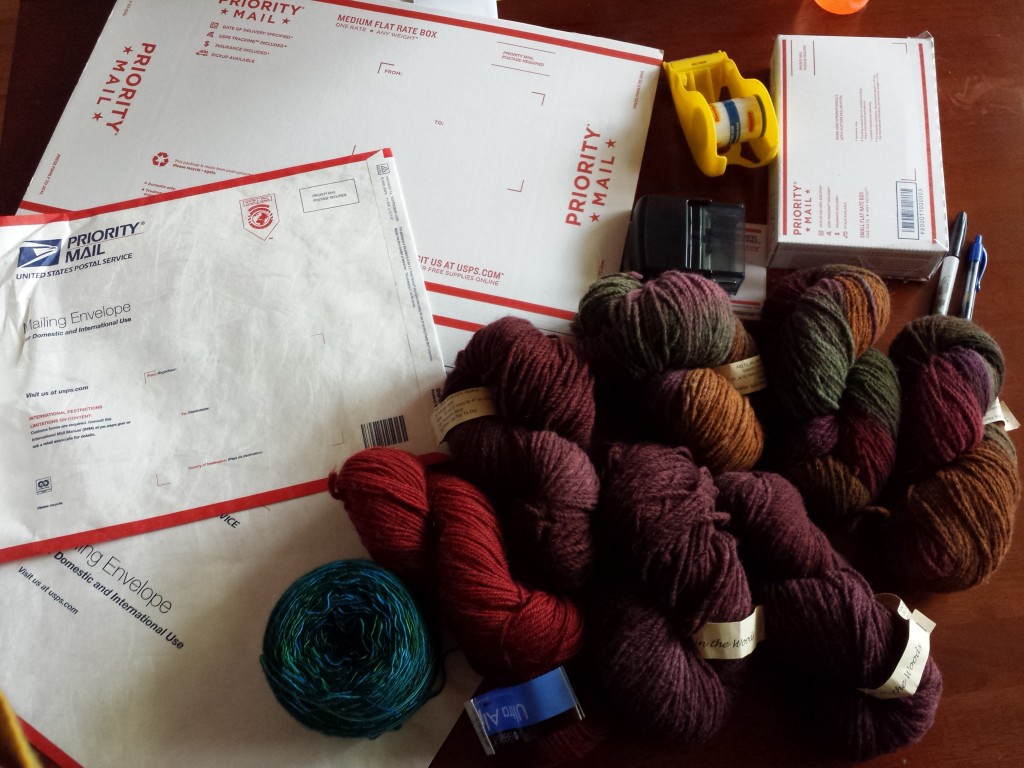 No, I’m not giving up knitting. You can pry my needles out of my cold, dead hands.

I am, however, letting go of more yarn. I did some soul searching, and also a bit of thought about my stash, what I like to knit, what I have time to knit, etc. I then posted yarn to my for sale or trade page on Ravelry and told some sweet online friends to have at it and pick whatever they wanted. Merry Early Giftmas! And, now, 10 skeins of yarn are moving on to other homes where they will be cherished and loved and, more importantly, knit into other things.

My yarn drawers are looking better and better each month between the projects I’m working through and the yarns I’m sending on. Maybe, at this rate, I’ll eventually get to my dream of a zero stash after all?

In other knitting news, next week I’ll be in a cabin in the woods with my knit group. I’m trying to plan what I’ll take with me though that’s quite difficult considering all I wish to accomplish. I tend to be an overachiever, after all, when it comes to the amount of projects I think I can get done. I will be knitting until my fingers bleed, but hopefully I can come home with a project or two finished and feeling like it was a good, productive weekend away. The plan at the moment is to take the Husband’s cardigan, to finish his holiday stocking, and to make the Little Mr a new hat since he’s outgrown the one I made him earlier this year (so much for that pattern being toddler sized… either that or my kid has a big noggin!) I may take my sock needles with me just in case – we’ve started dyeing yarn each year so worst case if I get too bored – or I finish projects quickly – I can throw my yarn in a bag in the dryer and then wind it up and knit it. 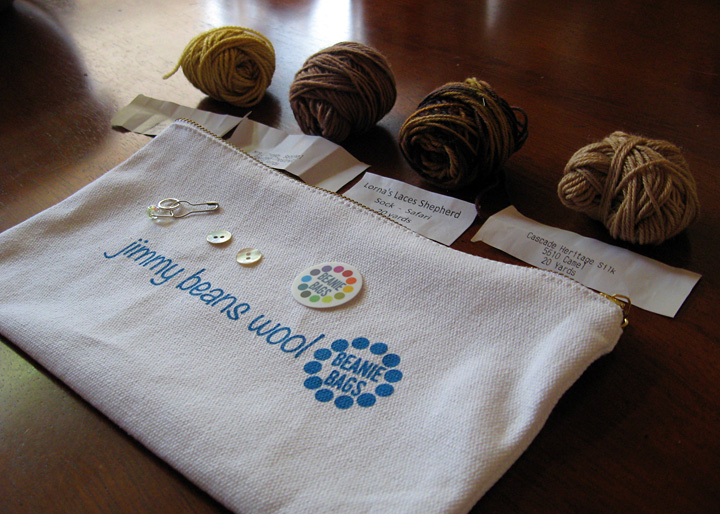 Last month I saw a post about Jimmy Beans Wool offering a subscription service for yarn. For $10, each month you receive samplings of different yarns. Since I’m no stranger to $10 shipments (I had Birchbox previously, but I’ve tired of the samples of cosmetics and canceled it), I was totally in!

Today my shipment arrived (well, last night technically) so I thought I’d show off what I received. There’s 20 yards each of the following (from left to right): Baah La Jolla/Byzantine Gold; Mrs Crosby Satchel/Roasted Chestnut; Lorna’s Laces Shepherd Sock/Safari; Cascade Heritage Silk/5610 Camel. Plus there’s two buttons and a stitch marker. They also included a little printed card that has a wristlet pattern on the back of it, but since I’m not a knitted jewelry kind of person it’s not really something I’ll wear and therefore won’t make.

I’m kind of ‘meh’ on the colors. They’re very fall-like, for sure. I might use the gold for a star ornament, and the chestnut for the trunk on some holiday trees. The safari and the camel… I will probably just swatch those to see how they knit unless some other pattern comes to mind.

The husband told me I should probably make a list of all my projects so I don’t lose track. So this is exactly what this post is. Allow me to present my epic to do list of holiday crafts and gifts:

Missing from this list is a lot of gifts for a lot of people. I can’t decide what to make for everyone on my list, and the niece and nephew will probably just want money. So I might make them an ornament and that’ll be my handmade contribution to their ornament boxes. Same with the stepson and his girlfriend.

Also, I’m not sure that I really want to spend time making something for someone and it not be appreciated. So there’s that. Not everyone is knit worthy, I’ve learned, and my time is more precious these days.

I also have a baby gift to knit, which hasn’t even been started yet. It’s not a sweater, at least, but I can’t ever do something easy like a knit ball. So I really should get on that, too.