Yesterday I spent time laboring hard in the garden. Weeds were growing and I needed to get in there before they completely got out of hand. Which then reminded me of how hard it is to tell weed sprouts sometimes from actual veggie sprouts. It’s not so bad with the tomatoes and peppers, but it gets complicated with the radishes and such.

This year’s disappointments: beans, squash, and beets. I have a cucumber growing okay, but my squash isn’t at all. I thought maybe I saw a single sprout that looked different from the rest of the weeds so I left it in place for the time being but I’m pretty positive it’s just a weed. Same goes for the beets – one small sprout to keep my eye on. The beans…. They’re not there at all. I accidentally disturbed one that had barely started to grow, so I covered it back up in the soil in hopes it will still grow but I’m not very hopeful.

Weeding was rough – the soil too dry to easily break up. It’s my own fault- last year we had more rain than we needed, this year I need to water more often and I forget half the time.

The tomatoes and peppers are taking off wonderfully right now – blooms can already be found on them all. Trellises need built still, which we keep putting off for the “right day” that never comes. I think this coming holiday weekend needs to be a “work” weekend to get them built – if I put it off too much longer it’s going to be too late.

I don’t know what to do with the empty spaces of the garden that are missing their intended crops. And I abhor weeding empty spaces. But I’m afraid it might be too late to buy more veggies at the store to fill the spaces with. 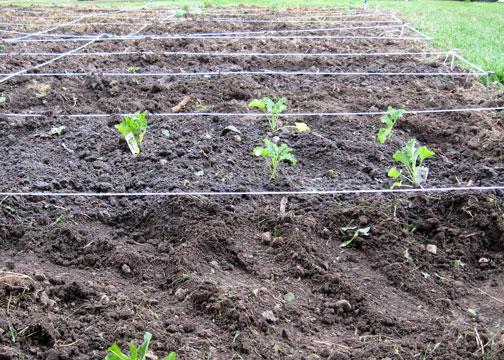 Today was a day for garden work. Yesterday the Mr tilled and expanded our planting area. Which really wasn’t an expansion at all because while we’re widening it, we’re also leaving very well defined walking areas. It’s my way of making designated planting beds without the expense of raised beds (which we just can’t afford – wood plus soil to fill them with is very much out of our price range for the size/number of beds we want).

We used tent stakes to mark out where our corners of our boxes were, and then I used cotton yarn leftovers to draw them out. We’ve had this idea in place for months now, but just seeing that even bigger plot of dirt freaked me out and made me think that maybe this was a huge mistake. I’m normally able to visualize things, but I just couldn’t do it today. So the yarn lines definitely helped.

The garden is broken up into 4 quadrants, with 3 ‘beds’ in each one. The idea is that this will make it easy to rotate crops year-to-year, which we haven’t really been doing much since we bought the house and put in the garden. We’ll be mulching the planting areas, and I’m not sure what we’ll do with the paths between all the beds. I would love to have the whole thing laid out with landscaping tiles or bricks. Maybe even just some simple stepping stones here and there with some sort of low-growing ground cover plant. Hell, I’d even be happy with grass. I’m just happy to have really, truly defined growing beds instead of one big mess like we’ve had every other year.

Today we planted almost everything, though technically our frost date isn’t until later this week. (Mother Nature might smack my happy ass back to reality on that and ruin everything, but I’m hoping not.) We have 3 rows of tomatoes, celery, kale, radishes, beets, eggplant, peppers (bell and jalapeno), tomatillo, corn, beans (both green for eating fresh and black for drying and cooking), cucumber, and squash. I have 1 ‘bed’ left open that is being held for zucchini and summer squash plants that still need purchased.

Later this week/weekend we’re going to be putting in the trellises. We were both just too tired after yard work today to plant and build trellises, but the plants needed in the ground ASAP as I have a tendency to kill things in containers. And since I had to spend $40 on plants after I failed miserably on seed starting this year… I really didn’t want to lose even more money by letting plants die. 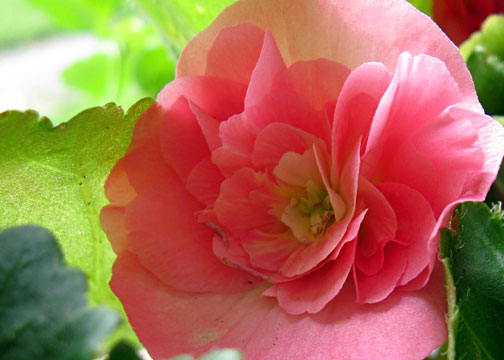 I did splurge at the store today and bought myself something different for one of my flower beds: a pretty, big-flowered begonia. I normally plant impatiens, but I saw these at the store and knew right away I had to have them! 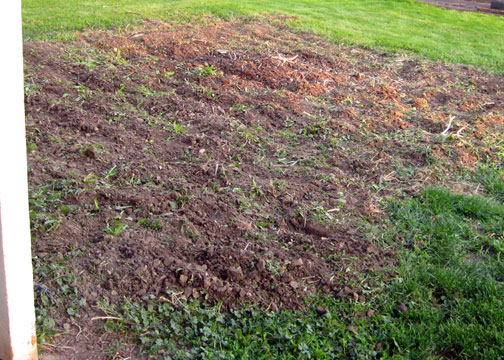 I just spent half an hour outdoors with my dad learning how to use the new tiller my parents bought us! I LOVE IT.

I just did a quick pass-through. Enough to get a feel for it and knock down some weeds. The early spring weather had the weeds coming on pretty early, and they were going to get out of control pretty quickly. I’m going to go through the garden again later this spring and mix in some compost and really get it prepped for planting.

Apparently all I needed to boost my mood and get my mind off of things was some garden time. 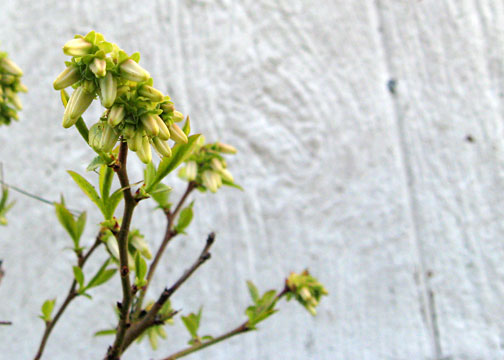 This morning I took some rounds around the garden, taking stock of the spring growth around this place. I’ve realized that, despite my best efforts, things just continue to grow. Because I quite certainly do my best to kill them (not on purpose, of course). The blueberry bush has its little leaf nubs, as does my hydrangea, crabapple tree, and raspberry. The rhubarb is still going strong, pushing bright pink and green growth out of the brown earth.

When I look around, I see a lot of work ahead of me. The vegetable garden needs cleaned out and prepped. Trellises need built. Rain barrels need installed. There’s a lot of manual labor in store for me, especially when I put off a lot of it in the fall. There’s also a lot of expense that I’m really not looking forward to. Trellises need purchased, rain barrels need equipment to install them, and we’ve got a cubic yard or two of mulch to buy and install to help with weed control (which has gotten increasingly out of control with each season’s passing).

Sigh. I promised myself that this year would be different, and that this would be the year that things didn’t look like such a cluster. But I’m afraid maybe this will just be another year of watching things go to hell.