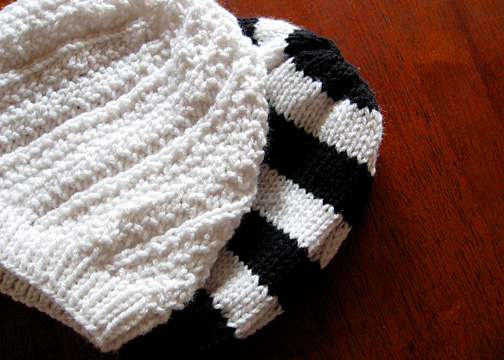 Charity hats #1 and 2. White one is Twistygoo, black and white one is Hadley. That’s 2 down, 8 more to go (with one kid-sized one on the needles currently).

It’s hard to believe that we’re in the final days before Thanksgiving. We’re hosting again this year, which means a lot of cleaning going on as well as a lot of stress. I’m sure the family doesn’t care if the house isn’t spotless, but I clean like they do regardless. I’ve decided this year to make my life a tad easier, so I’m just doing the turkey and stuffing (oh, and homemade cranberry sauce) and requested everyone else bring a dish or two. Last year I made sides and by the time everyone brought their own dishes we had too much food and not enough counter space!