I have a folder full of photos I’ve taken over the last few weeks but it has taken me impossible amounts of energy to get around to editing and posting them. I’ve been going to my chiropractor twice a week for the last 5 weeks attempting to regain some sort of normalcy in my life as far as my pain level goes, and today I feel like I finally had a bit of a breakthrough when I was informed that I can step my appointments down to once a week. 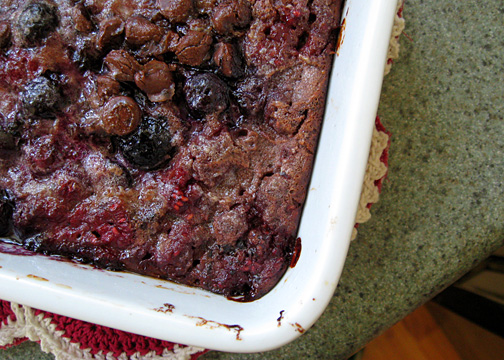 Chocolate berry bake thing. I just kind of winged it, mixing milk and egg and flour and sugar and cocoa powder and whatnot and baking until it wasn’t runny anymore. Next time I bake it I want to play with the recipe a bit more and see if I can improve upon it. 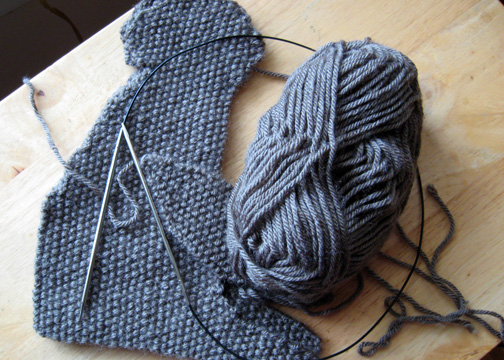 Baby knitting for a coworker. I refuse to knit sweaters and other wearables until I know the gender, so for now I’ve been knitting this sweet vintage bunny as a gift. I have it mostly sewn up at this point, but I’m undecided on whether to put a plain fabric in the ears or if I want to pick out some pretty quilting cotton fabric for them. 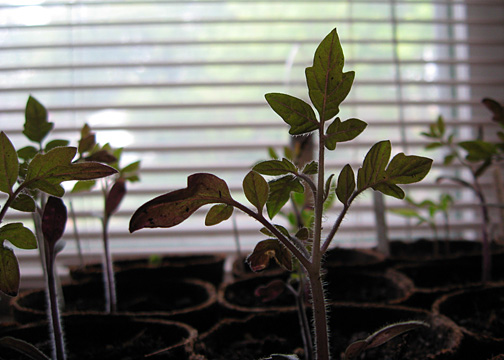 My veggies should be outside, but we had to bring them in thanks to a few frost warnings the last few days. The weather is supposed to warm up tomorrow and stay there, so I’ll probably plant them in the evening after work. 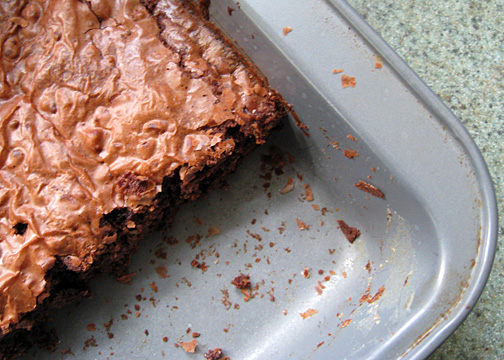 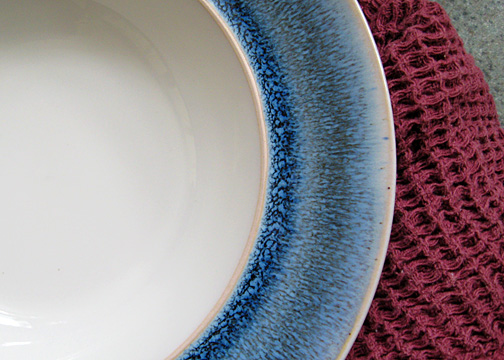 Saturday I scored a fantastic deal on new dishes. I’ve been wanting new ones for a while now – I think a lot of the experience of cooking and eating dinner at home can be improved simply by having nice dishes and silverware that you love (and I no longer love the set my grandmother found at a garage sale for me), but dishes are always so expensive. I found, by sheer luck, a display of these gorgeous plates and bowls and a few additional pieces (such as the larger serving/salad bowl and such) on clearance for 80% off the full price. I couldn’t believe it! As soon as I came home I made up a batch of brownies to bake while I took the stickers off and washed them, and then promptly enjoyed a straight-from-the-oven-and-still-gooey brownie on my brand new dishes (I also may have just wanted an excuse to eat a brownie… Mother’s Day is pretty torturous and emotional around here so eating my feelings was definitely the theme for the weekend.) 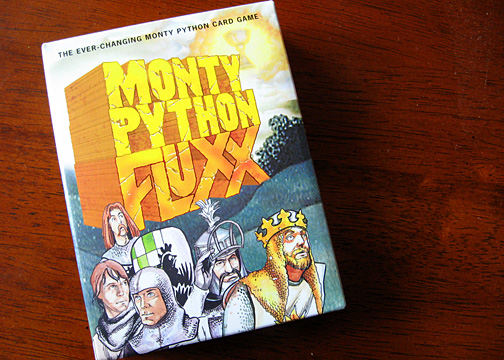 Has anyone ever played Fluxx? I’ve been desperately trying to find games the Mr and I can play with just the two of us – most games I’ve found say 3+ players – and last weekend while out for a “date day” we stopped by a game store at the mall and I found a display of several versions of Fluxx. Of course I had to grab the Monty Python version. We haven’t yet taken the time to sit down and figure it out and play it, but we will soon. 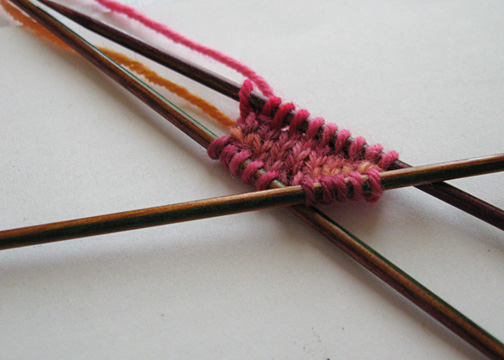 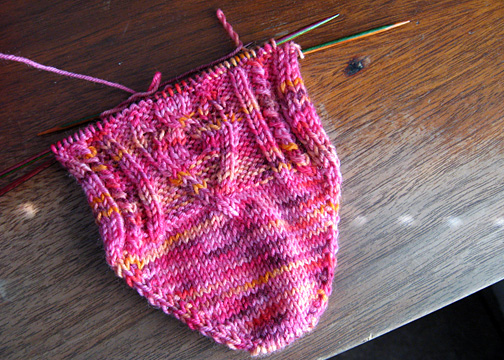 I cast on for another pair of socks. True Love this time, which is a pattern I picked up back in February when the designer was giving it away as a freebie for Valentine’s Day. This is only my 2nd pair of toe-up socks, and it took me 3 tries to get the cast-on right. Things have gone smoothly since then, and I’ve noticed that my intuitiveness with cables is much improved. It still takes me a bit to accustom myself to each individual pattern’s marking/style, but I’ve started to be able to just look at the pattern and know which cable and which direction I’m going rather than having to constantly refer to the pattern notes. 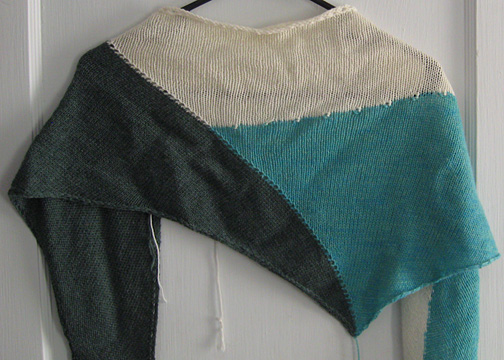 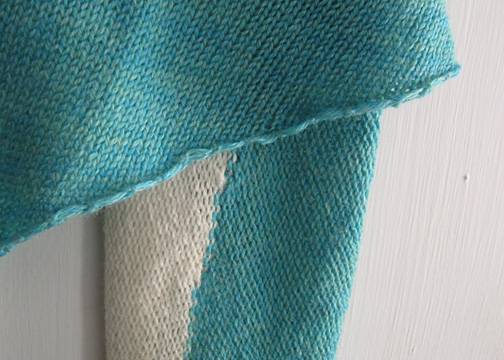 My Burst of Colors shawl, a little rumpled from leaving it on the spare bedroom desk after blocking. Excellent for some mindless knitting, and it’s made in the yarn I picked up in Michigan on our anniversary trip. I LOVE this yarn. It’s so soft, and the colors are gorgeous. And, even though I intentionally purchased it for a Color Affection, I have to say that I’m happy I chose to knit this instead. 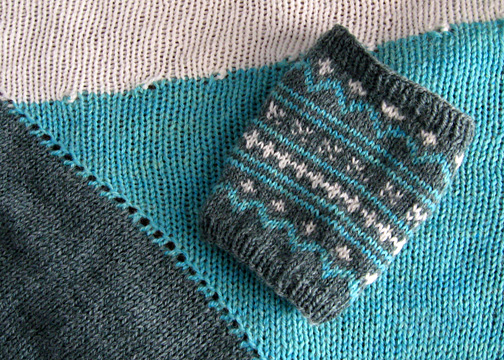 I had quite a bit leftover, so I made myself a little coffee cup sleeve for my Starbucks days for knitting. It’s a bit tight, and the X pattern in the middle got a little lost, but it serves its purpose and I’ll probably use it more than I’ll wear my shawl! 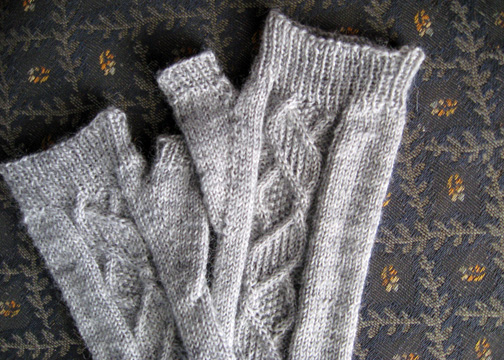 And my geek girl mitts, finished and blocked and ready to be shipped out for my yarn swap at the end of this month. The yarn was a little too thin and more like lace weight than a fingering weight. But they still turned out nicely and the stitch definition is quite nice on those cables. (On a totally unrelated note, the fabric behind the mitts? It’s the seat of an old chair I picked up at the Goodwill a while back. I thought I’d recover it with something that matched the room better but the current one has grown on me in the only way an old, beat up chair can.)