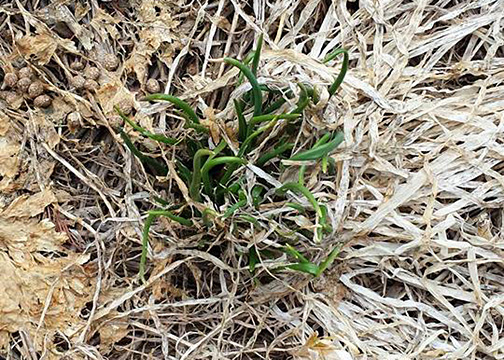 In what might be the best thing ever to happen to this lazy gardener (who still has yet to start her seeds… I really should get on that) – chives growing from last year’s plantings.  I had no idea that they would end up a perennial once established, and had assumed I’d have to re-plant all of my herbs this spring. I had also assumed that even if a few things around the house were perennials, the bitter cold and snowy Ohio winter would have killed things off entirely.

And, yet, here they are. Lovely little green spikes, rising from the wasteland of death that is my raised beds. It also appears that there is quite a bit if squirrel poop in the beds, as well, which really is to be suspected. We’ve been fighting squirrels getting into our attic, and they feasted quite well on the leftovers of last year’s garden over the winter. I feel like I’m fighting a losing battle with them, at this point.