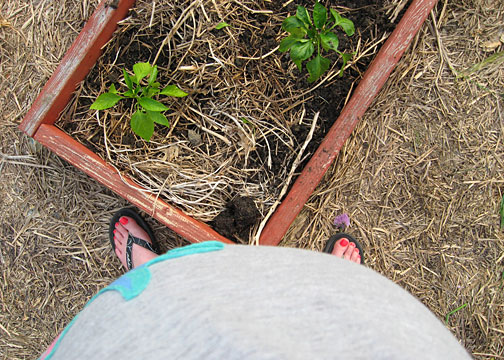 Oh, the garden. It’s just not going to be a great year for it. The weather doesn’t like to cooperate, my body doesn’t want to cooperate, some of my seedlings have died because I forgot about them… Not a good year at all for the garden.

Last night I forced myself to plant. 7 tomatoes, 4 peppers, and an eggplant. That’s it. A far cry from the usual yearly garden. I should probably pop a few zucchini seeds in one of the beds so we have an endless harvest of that, too, to keep up with. But the amount of energy that went into digging a hole and planting a plant was enough to leave me exhausted.

I don’t like this one bit. I want to do more. I need to do more. But I can’t, and it frustrates me to no end. How in the hell did people 200+ years ago manage to survive being both pregnant and tending their farm/homestead? I certainly can’t imagine a woman just sitting around the house all day simply because she’s pregnant.

Half a garden is enough, I suppose. I’ll probably be thankful come August to only have half the harvest to deal with. Most of our extra veggies will probably be given away – canning tomatoes and such isn’t going to happen with a newborn, anyway. I guess we can just call this a “rebuilding” year and look to get back in the swing of things next year.