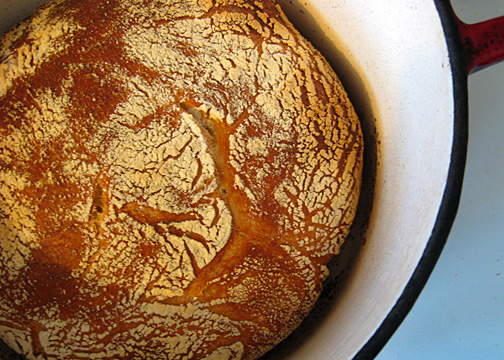 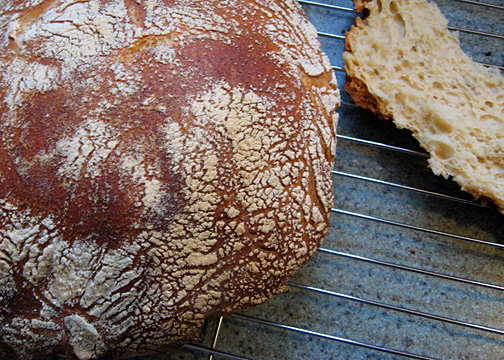 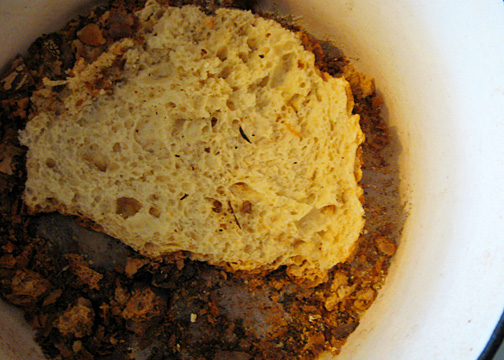 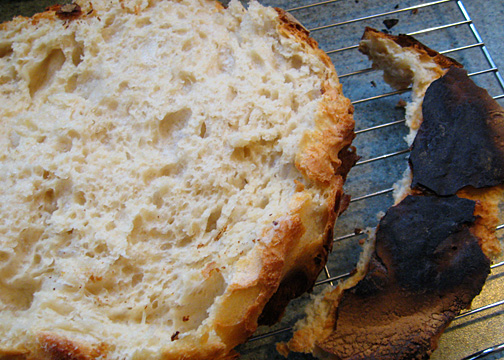 Last night I started a loaf of bread. I gave this recipe a try after Alicia posted it. I’ve gotten away from eating a lot of breads (the homemade variety being the exception) but haven’t made homemade bread in a while so I thought I’d give this a shot instead of my regular recipe. I was feeling adventurous, I suppose.

I’m impatient, and I’m the first person to admit it. Mixing this up and then having to wait all night long for it to rise, and then taking even more time to let it rise again before you can bake it might as well have been torture. Still, before I knew it I was readying the oven and popping the dough in my dutch oven and baking away. The house filled with that delicious warm scent of fresh bread. My anticipation and excitement grew with each passing minute. And, finally, the bread was done. Beautiful, glorious, golden brown bread. Bread with a hard, crispy crust and a soft, chewy, tender crumb.

And then I tried to remove the loaf from the pan. It wouldn’t budge. There I am, standing at the stove, trying to remove a stuck loaf of bread from a 475 degree cast iron pot without burning myself. It took both the husband and I to get it out – he held the pan, and I prodded and pulled and pushed the edges with a wooden spoon until it finally came out, leaving a mess behind in the pot. I’m not sure what went wrong. Obviously the bottom baked too long, so that’s a timing issue. I’m pretty positive it would have been stuck regardless of that, however. I’ve suspected for a while now that my oven is ‘off’ – the temperature never seems to stay even or even correct, and things tend to get over-baked pretty quickly. So perhaps it’s the oven.

Oh well. It’s still edible, and still looks gorgeous if you ignore that it’s missing the entire bottom crust. I’ll just consider this to be a part of the learning process.