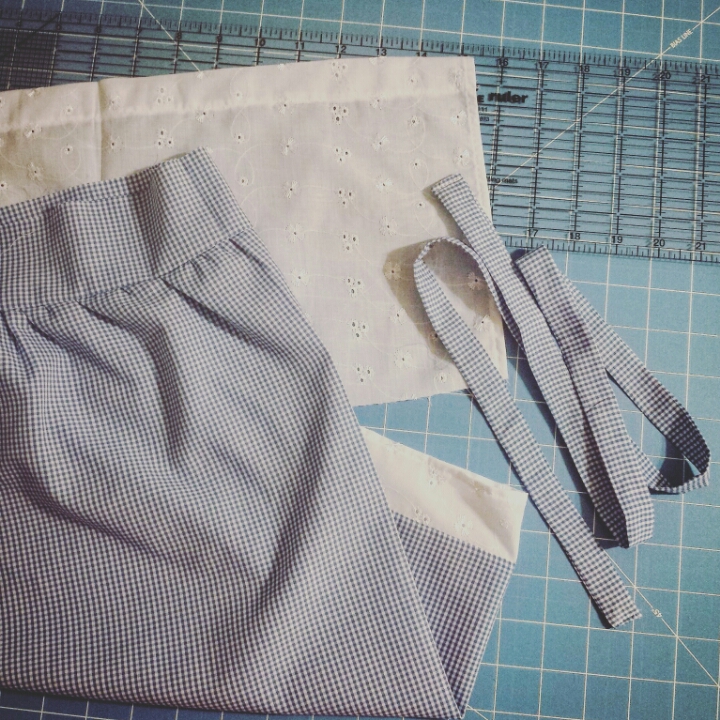 I’m being super lazy tonight and sharing an Instagram photo. My camera is somewhere downstairs but it isn’t like it matters – I’ve probably got several weeks worth of photos on there that I haven’t had the time to edit and write about here. Sigh Sooo cell phone updating will have to do.

I got a new sewing machine (more on that in another post), so I’m breaking it in with a new apron project. Many years ago I was obsessed with this apron pattern and had purchased enough fabric to make four of them. One actually ended up made, another I attempted to make as a half apron and ignored the directions and winged it – and failed – and the other I ended up using the fabric to make a skirt  (also winged it, also failed). This blue gingham and white eyelet had been tucked away in the closet since then.

I knew from the beginning I wanted this combo as an apron. It’s why it didn’t get used on a different project. As a little girl, The Wizard of Oz was my favorite movie. I even went as Dorothy for Halloween, and this was back before it was more popular like it has been in recent years. My mom sewed me up a dress, and we took some old church shoes and glittered them up ourselves. I hated the constant requests to click my heels by neighbors, but they all thought I looked fabulous. So there’s a lot of nostalgia in this apron for me. Kind of an adult version of dress-up (but not the “adult” version if you know what I’m saying and I think you do).

With Halloween coming up, and a new machine to play with, it seemed like a perfect reason to finally make this up. I’m not sure if we’re passing out candy this year or if we’re going to let the Little Mr go to a few houses of friends in the area, but either way I’m probably going to end up wearing this thing outside of the house. Maybe even with my own DIY ruby red slippers, just like my childhood pair.